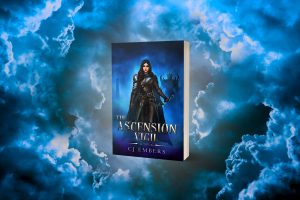 I was wrong. The remnant wasn’t gone. It had only been in hiding, and now, everything I bled for is at risk.

With the consequences of Kena’s actions laid bare before her and the truth of her attempt at the Trial haunting her, she struggles to continue leading Karua. As the shadows of her recent past threatens to corrupt her once more, she must learn how to coexist with the memories of her god and his soul-shattering absence.

When unrest amongst her people continues to grow, Kena is forced to question everything, including herself… and her own life. Amidst wondering if her country would be better off without her, a new threat looms, cracking Karua to its core.

With the country in peril and Kena’s darkness chasing after her with every step, she fights to keep everything together while desperately wishing for one thing… for Helis to rescind his verdict and return to her.

After a few bumps in the road, The Ascension Vigil is finally published— and pretty much on time, too! So first things first, LOOK AT THAT COVER! DROOL! Ugh. Gorgeous. My illustrator is a godsend. He takes my literal stick figure concept sketch and list of details and turns it into THAT.

This book is about fifty or so pages bigger than its predecessor, which is awesome, AND it’s got a PRONUNCIATIONS page! I added this because 1) the few people I asked didn’t know how Kena’s name is pronounced, and 2) because the number of unique names just kept growing as I was writing until eventually I was like you know what, I’m going to add a Pronunciations page.

Another thing I also did differently this time around is using a tool that helps catch errors. I found out about it between TAT and TAV; otherwise I would have used it sooner, because I’m sick and tired of 20+ minor errors somehow slipping past my countless read throughs. So normally, after doing numerous edits of the digital file, my last edit would be via proof. This time, after I was done going through the proof, I did one last read through on the digital file with that tool. I found 17 errors via the proof… and another 26(!) with that tool. Had I not used that tool, that would be 26 errors that had slipped through, which is honestly about the amount that I usually find after publication with my books. So now, that’s not a worry this time! They were super minor things like a missing or extra word, but 26 really adds up.

Anyway, TAV is available in paperback and eBook (including Kindle Unlimited) as per usual.

I finished writing this book ages ago, like maybe a few months after publishing the first book. And it drove me crazy having to wait so long to publish it, but alas; covers are expensive.

The last month or two leading up to the publication was… interesting… to say the least. Those bumps in the road I mentioned? Well, one was that I was planning on using tax return money to get Vigil’s cover, and then the amount my fiancé and I got back was so little, we were unable to do literally any of the things we had planned for this year, which of course included this cover.

So, to get around this because damn it, I wanted another cover, I got into more debt (yay!) by getting a new credit card. Thanks, government. Then, the payment method glitched, and it charged the wrong one, making the credit card moot. So I had to scramble to figure out how to fix the fact that the money was going to come out of an account that CERTAINLY did not have $700+ in it. So I signed up for overdraft protection as a quick patch, then asked around and somehow managed to find someone who was like “Yeah, sure” when asked to borrow the money. So all in all, still in further debt, but now with no interest… Silver linings, I suppose.

The last bump in the road was an absolutely lovely (that’s sarcasm) experience I had with my (now former) beta reader in which I was blackmailed and threatened regarding my books. So that was nice… It reminded me of when my former best friend admitted to me that she was attempting to steal one of my books by way of copying it and publishing it as her own.

All in all, however, those bumps did not tarnish my excitement for this book to be published, and my word, waiting for the cover was a mighty test of patience! I waited over TWENTY days for it! I had a very difficult time falling asleep the night I received it, because I couldn’t stop grinning like a fool. Kena is gorgeous as usual, Helis is yummy af even though he’s leaving lol and the BLUE is soooo nice. Can you tell I’m excited?

Also, the blurb took me soo many months to get down pat, and I’m stoked with how it turned out. I think it’s the longest blurb I’ve ever written so far.

I still can’t believe this series came from a 2000-word dream. Talk about wild!

Want to stay up to date on my book news?

Follow my Buy Me a Coffee page to be notified immediately of important announcements, such as new releases, cover reveals, etc.! Following is free.